Roaming and chronicling the metropolis since 2009

The Urban Roamer is a proud
SiteGround hosted site

How I spent my Independence Day holiday 😎 #cons

Sorry, no Tweets were found.

It’s been a while but with some interesting developments going around the metropolis during the past few months, this merits a new edition of our Roamer’s Roundup!

Here’s some good news first to start things off. Heeding the petition of thousands spearheaded by the conductor of the Philippine Philharmonic Orchestra Olivier Ochanine, the Philamlife Auditorium is headed to get a new lease of life under new ownership which is that of the SM group’s SMDC which has plans of building another one of those residential projects there.

In a statement released by SMDC, they said, “Although the development plan is still in its initial stage, SMDC stressed that the complete theater including all its elements and most especially its acoustics will be preserved. This will be done in close consultation with the country’s music, acoustics and design experts.”

They mentioned the possibility of the hall “may be moved within the complex to complement the overall master plan of the property, which will also include a larger parking area for the benefit and convenience of the theater-goers.”

Curiously, they never mentioned anything about the Philamlife Building itself, so there may be a possibility that the landmark design of this building may not be saved or it could adapted into whatever design SMDC has in mind. Pessimistic as one may feel about SM, I still hope they would go for the latter.

This next item is an accidental discovery the Roamer has made in one of his walks around Intramuros, and actually it’s about a spot that hasn’t been featured yet in this blog, (shame on me) the San Agustin Church.

It was surprising to see some works being done to the church but it was not the usual that I was expecting. Now I am not an expert in restoration work but whatever they’re doing to San Agustin Church makes it look like they’re turning it into a different church and not San Agustin that many have come to know.

For instance, there’s no new paint job anymore it seems for the church which for over the years as far as this Roamer remembers had spotted a pale yellow or beige finish. Now it employs a sort of a bare finish feel. And it seems the plastering has been taken off as well as one can see now the outlines of the bricks that made the foundation of the church.

Being not only a cultural treasure as deemed by the National Commission for Culture and the Arts (NCCA) and the National Historical Commission of the Philippines (NHCP) but also a UNESCO World Heritage site, I’m not sure if the agencies concerned were fine with the works being done at the church. At least Ivan Henares, when I asked him about this through Twitter thought of it as “stupid” as our churches are meant to be colored and plastered. Then again, I guess we have to wait until this is done before final judgment can be made. 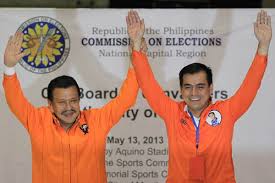 Finally, the Urban Roamer congratulates former president Joseph Estrada for being elected as the next mayor of the City of Manila and wishes him all the luck in this tough job he’s about to take. Seriously speaking.

As someone who has seen Manila fall into tough times thanks to the 6 years of the current mayor’s incumbency, I can only hope for things in the city to turn around and be better. While I am no fan of a former president who was ousted, jailed, eventually pardoned and tried running again for president in 2010, I am willing to support whatever plans he has for the city that will be of benefit and be a fierce critic of anything he will do that will not be for the city’s good.

More about my Manila wishlist for the incoming mayor in a future entry.

2016 Elections: The Most Contested Fights In Metro Manila

This site uses Akismet to reduce spam. Learn how your comment data is processed.